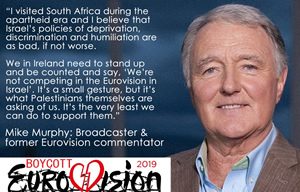 The Knocknacarra Palestine Network (KPN) is pleased to announce that legendary broadcaster, ex-RTE presenter, and former Eurovision Song Contest commentator Mike Murphy will be the key-note speaker at the launch of their ‘Boycott Eurovision 2019 in Israel’ gig.

The launch will be held in Richardson’s Meeting Room, Eyre Sqaure, Galway on Tuesday 26th March commencing at 7.30pm.

Mike Murphy will discuss his personal experience of Palestine and outline why he believes Ireland should boycott this year’s Eurovision Song Contest in Israel. Mike will be joined on the evening by a Palestinian refugee, and a number of other eye-witnesses to give brutal truth reports of the plight of the Palestinian people: the people they met, events they experienced, and accounts of the daily attacks perpetrated by Israel. All speakers give their support to the BDS Movement and the current campaign being run in Ireland and other countries to Boycott Eurovision 2019.

This year’s Eurovision contest will be held in Tel Aviv, Israel. Inspired by the struggle that brought down apartheid South Africa, Palestinian civil society has called since 2004 for the cultural boycott of Israel, to challenge the impunity of Israel’s regime of apartheid, occupation and settler-colonialism. Holding the Eurovision contest in Israel ‘whitewashes’ Israel’s ongoing contravention of international laws, and its human rights abuses against the Palestinian people. Over a decade ago Israel launched their ‘Brand Israel’ programme. It has poured millions into promoting musicians and artists to portray a liberal face of Israel, purposely to counteract reports of its occupation of Palestine.

KPN has been running weekly stalls, obtaining signatures petitioning RTE not to send an Irish entrant to the competition this year and not to broadcast the show. Although RTE have ignored the thousands of people in Ireland, including former Irish Eurovision entrants, singers, musicians, and composers who have signed so far, the campaign will continue in solidarity with Palestinians. The NUJ has said that it will support action taken by any employee involved in the TV production who withdraws their labour through conscientious objection.

Apartheid-Free Eurovision parties and events are planned for all over Europe on the evening of the Eurovision final broadcast, Saturday 18th May. To actively show support for the boycott, KPN is launching their ‘Support Palestine – Alternative Music Event’ that will be held here in Galway. Local singers, musicians, bands, and comedians are volunteering to perform at the gig which should be a great night of entertainment and a strong statement in support of freedom and justice for the Palestinian people. More details of this will be available soon.

All supporters of the Palestinian cause and anyone who wishes to listen and learn about the ongoing situation is welcome to attend the launch on Tuesday 26th March at 7.30pm.

Please note this is a launch event and will not be a public forum for debating arguments against the boycott or the Palestine support campaign.