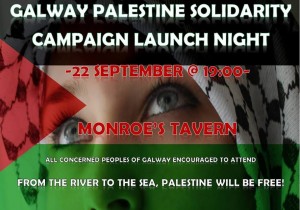 There has been a long history of Palestine Solidarity activism in Galway. A Galway branch of the Ireland Palestine Solidarity Campaign was formed here as far back as the year 2001 (you can find detailed information on the activity of that branch and other groups below). After a long Summer of activism across the county, we will be relaunching GPSC this coming Monday the 22nd at 7pm in Monroe’s Tavern, Galway City. The venue, Monroes, have been amazing in their support for Palestine activists down through the years.

We have seen toy drives, gigs, table quizzes, boycott actions, art exhibitions, vigils and protests over the past while; as well as a highly active student group – NUIG Palestine Solidarity Society – operating in the university. On the night we will have words from a representative of the national Ireland Palestine Solidarity Campaign as well as contributions from Galway-based activists. It is hoped that we’ll have a part of the night dedicated to Galway Artists for Gaza also.

We hope to see you next Monday with the momentum created by actions in Tuam, Ballinasloe, Kinvara, Connemara and Galway City, to name but a few.