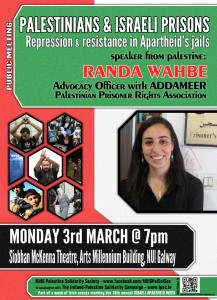 This event is organised by the NUIG Palestine Solidarity Society in association with the Ireland-Palestine Solidarity Campaign (IPSC) as one of a series of events taking place around Ireland during international Israeli Apartheid Week 2013 (1st – 8th March). See the IAW 2014 page for a full list of events taking place around Ireland.