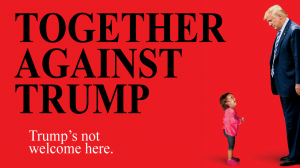 Galway comes together to rally against Trump.

“We are holding a rally to show that US President Donald Trump is not wanted or welcome here.”

US President Donald Trump is coming to Ireland on June 5th, arriving at Shannon airport. Many people in Ireland are displeased with Mr. Trump’s personal attitudes that he vocalises and displays publicly. Many are angry at his policies that adversely affect not only the USA but the whole world. In order to demonstrate opposition to his stance and political regime, protests will be held in Shannon and Dublin during his visit

There will also be a ‘Galway Together Against Trump’ rally on the eve of the President’s arrival. The rally will commence at 6.30pm in Eyre Square on Tuesday 4th June.

Galway Together Against Trump’ organisers say,

“There are so many reasons to demonstrate against President’s Trump visit and to send our message that we disagree with his programme,which as leader of the USA superpower sets a global trend. We are holding a rally to show that US President Donald Trump is not wanted or welcome here. We want no part in the Irish Government’s complacency and compliance with the Trump regime. Groups and individuals who have a reason to protest against President Trump are asked to come along.

“It is important that we in Galway send a message to Trump supporters across the world that we do not share their values. We value peace and we want a better world for everyone. We also want to show solidarity with people resisting in the US and further afield -they are not alone.”

Two US Veterans for Peace will address the rally. The veterans are currently being held on bail in Ireland for protesting to get Trump’s troops out of Shannon airport as they undermine Irish neutrality on their way to wage war. They will tell why they felt compelled to act.

“The world is a much less stable place with the violent figures President Trump has brought in to draw up his foreign policy. It is essential to stand up against warmonger Trump with his brutal imperialist wars, regime changes, dangerous nuclear position, and international arms funding and dealing. We are not his war ally and we say ‘NO’ to his wars.“

“Donald Trump is a dangerous enabler of Israeli apartheid; he is anti-Palestine by his acts. He supports the theft of Palestinian land and ignores war crimes committed against the Palestinian people which use the very funds Trump’s administration has given to Israel. There can never be peace without justice.”

“Abortion Access Campaign West wishes to express solidarity with and support for the Women of the US in their struggle for reproductive rights.”

Mr. Trump has previously said that women who have abortions should be “punished”. His administration has sought to remove reproductive health rights for millions of people across the US. Legal battles are being waged as laws work to ban abortion rights. Thousands have joined in protests to defend these rights.

Sharon Murphy of The Galway One World Centre will attend to highlight the stepping up of racism inspired and carried out under President Trump. Anti-racists will have a chance to demonstrate against what Donald Trump’s presidency has ushered in, and where it is leading.

Galway Together Against Trump state,

“An immediate pressing issue is President Trump’s lack of action on climate change. He has given confidence to the far right as he leads society with his Islamophobic Muslim ban, viscous attacks on the LGBTQ+ community, ill-treatment of indigenous people and their lands, attacks on workers forcing them to strike. The Trump administration’s handling of migrants have amounted to crimes. Human rights and civil rights are attacked across the board. We are calling on the Irish Government to represent our views when meeting the US President, and we need the people of Galway to help get the message across.”