[Galway] Film Screening: Not Just Your Picture – The Story of the Kilani Family (ICHR) 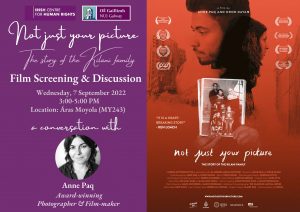 The Irish Centre for Human Rights is pleased to invite you to an in-person film screening and discussion with award-winning film-maker Anne Paq on Wednesday, 7 September 2022, from 3-5 pm at Áras Moyola (MY243) at the University of Galway. We will be screening Anne Paq’s latest film “Not Just Your Picture – The Story of the Kilani Family” (56 minutes), co-directed with Dror Dayan.

Anne Paq (France) is an LLM graduate of the Irish Centre for Human Rights. She has lived and worked in Palestine for over a decade and has been a member of Activestills photo collective since 2006. In 2016, she won the “International Photographer of the Year” award for her award-winning web-documentary “Obliterated Families” about Palestinian families in the Gaza Strip shattered by the 2014 Israeli military offensive. She is currently based in Paris.

“Not Just Your Picture” tells the story of the Kilani family, whose roots lie between Palestine and Germany. It focuses on siblings, Layla and Ramsis, whose search for justice leads them to redefine their political and personal identity when their father and siblings are killed in an Israeli military offensive over the Gaza Strip. The film is about loss and pain, resistance, and steadfastness, but also about the political growth and activism of the Kilani siblings. From their pain and story, they draw amazing strength to speak up for justice for their family and for all the people of Palestine.

The film screening is open to the public and will be followed by a discussion with Anne Paq on human rights in Palestine and the (often elusive) search for justice for the Palestinian people.

We look forward to seeing you at the event.