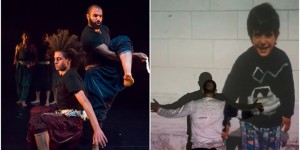 The Symposium asks:
What forms do cultural resilience and transmission take in 2017?
What roles have the relationships within traditional arts and culture in an increasingly culturally fluid and diverse world?
How can dance and embodied practices emphasise and enable the sharing of ideas around culture?
What impacts can embodied arts practices have on issues of cultural identity within social justice and human rights contexts?

The Symposium brings together international and Irish artists whose work negotiates identity with/in traditional arts or cultural structures, to share their experiences and models of practice. The event concludes with a performance by El-Funoun Palestinian Dance Troupe of two works, The Rooster, and Partial Memory, from their 2016 repertoire.

The research residency taking place in Galway (15-24 August) between Irish dance artists and El-Funoun Palestinian Dance Troupe, forms the backdrop to the Symposium and Performance. The residency involves the exchange of technique, participative and performance practices, including a Cuairteoireacht evening (17 August) of traditional Irish music and dance by the Conamara Gaeltacht public in honour of El-Funoun.

Keynote: Art and Resistance – The role of El-Funoun Palestinian Dance Troupe in reviving Palestinian cultural identity
Noora Baker, Head of Productions, El-Funoun Dance Troupe, Palestine
Palestinian identity is under threat, but culture and art can revive it and play a role in its development. There is a need and importance for art to be part of a resistance movement. In answer to the alienation of artists from their surroundings, there is a need to connect to one’s past and traditions to build on the present. Since its inception in 1979, the mainly volunteer-run El-Funoun Palestinian Dance Troupe has played a significant role in reviving Palestinian traditional dance and music and expressing Arab- Palestinian traditional and contemporary identity. The artist has a responsibility to engage in what is happening in today’s world, to be aware of the dialogue between an artist and his/her own reality, how one is effected by it and affects it.

Workshop: Cultural Competency in Participatory Arts Practice
Tony Fegan, Director, Tallaght Community Arts
Tony Fegan explores in a workshop setting the increasingly important role of being culturally competent as an artist and artist facilitator in participatory arts practice. He draws on his experience of working in inter-cultural settings in London, South Africa, India and Tallaght. Cultural competence is the ability to communicate effectively and appropriately with people of diverse cultures. In interactions with people from diverse cultures a person who is inter-culturally competent understands the culture specific concepts of perception, thinking, feeling and acting. This has significant implications for those of us working in participatory arts practice in increasingly culturally diverse settings in Ireland and beyond.

In Conversation: Choreographer Catherine Young & the Welcoming the Stranger group with Dr. Finola Cronin (Head of Drama Studies, School of English, Drama & Film, UCD)
Choreographer Catherine Young, and members of the Welcoming the Stranger group, which includes migrants and refugees who have made Kerry their home, reflect on their experience of re-staging their work “Welcoming the Stranger” at Ramallah Contemporary Dance Festival, Palestine. They share insights into the challenges faced in including Ireland’s new communities in art projects, in particular issues of access for those living in direct provision. Catherine, whose choreographic style arises from contemporary and African dance, considers the transformation of her dancing body in its assimilation of Dabke, revealing choreographic practice as a site of intercultural intercorporeality.

Exchange: Dabke & Irish Step Dance
Dr. Breandán de Gallaí, Artistic Director, Ériu
Choreographer Breandán de Gallaí gives an of-the-moment reflection of the preceding week’s dance residency between his company Ériu and El-Funoun Palestinian Dance Troupe, which focused on an exchange of Palestinian Dabke and Irish step dance (both techniques which emphasise rhythm, percussiveness and footwork). De Gallaí’s work challenges notions of performed “Irishness”, which step dancing has historically represented.His overarching artistic ambition is to explore the expressive potential of the traditional Irish dance form and to use this potential to engage with and address issues and themes rarely explored in traditional dance.

Access Dance
Kelvin Akpaloo, Street Arts Academy
What are the pathways or barriers to accessing arts education, participation and performance for members of Ireland’s new communities? Ghanaian-born emerging choreographer Kelvin Akpaloo recounts his own experiences as a recently arrived teenager and young adult. With a traditional Ghanaian dance background, he has trained in hip-hop and contemporary dance, while keeping digitally connected with the ever-evolving African dance scene in Ghana. He considers how he assimilates the techniques, and social cultures, of Ghanaian and African dance, and hip-hop, in his evolving choreographic practice, which foregrounds story-telling.

EL-FUNOUN PALESTINIAN DANCE TROUPE PERFORMANCE (6pm – 7.15pm)
The Rooster – choreographed by Ata Khattab & Malek Andary
Partial Memory – choreographed by Ata Khattab
Who rules the roost? Five dancers fight over control of the Masbaha – the bead-string denoting leader of the Dabke dance. They struggle, win, lose, and abuse their power. Palestinian choreographer Ata Khattab, and Lebanese Malek Andary use the forms of their shared dance tradition to create a highly physical and dramatic exploration of male chauvinism and dictatorship. Based on the poem of the same name by the Syrian poet Nizar Qabbani, The Rooster reveals the corrosive impact of power, on those who have it, and on those who don’t.
Partial Memory is a memoir of childhood in occupied Palestine. In movement, words, and family photos, Ata Khattab reveals the memories of a child, seeing his father frequently imprisoned. It is a haunting and sensitive reflection of childhood, manhood, and love.
reviews from Edinburgh Fringe Festival 2016
★★★★★ A superb double bill. The Rooster is sexy, humorous, energetic, and totally masculine. Inspired by the forms of the ‘dabke’ folk dance, the piece explores the personal and group dynamics of power: how it can be abused, worshipped, won and lost. Emotionally profound, thought-provoking, disturbing and haunting. Partial Memory is a moving evocation of the universal experience of regret for a past that is lost forever; but with an intense and disturbing political twist. Highly recommended.” The Skinny
★★★★ “a double bill to remember”, The Scotsman
★★★★ “a truly notable piece of dance-theatre, The Times, UK