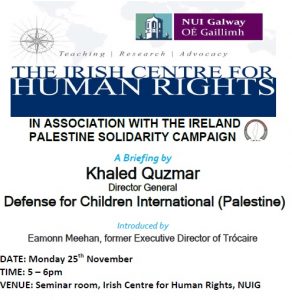 Khaled Quzmar specialises in issues of juvenile justice and grave violations against children during armed conflict. He joined DCIP in 1995 as a lawyer representing Palestinian children in Israeli military courts. He has an LLM in international human rights law from the Irish Centre for Human Rights at NUI Galway.

Defense for Children International operates all over the world, and Khaled is the General Commissioner in eight sections in North Africa and the Middle East. He is also Vice President and Advisor to the Pacific and Asian sections of the organisation.

He is a participant in the Global Child Forum, an initiative by the Swedish royal family that works all over the world to create partnerships with business to promote the UN Convention On The Rights Of The Child.