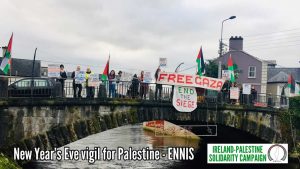 The Clare Branch of the Ireland-Palestine Solidarity Campaign (IPSC) is calling on people to gather at 2pm on Tuesday 31st December at the Club Bridge, Ennis, to attend our annual New Year’s Eve vigil for the people of Palestine.