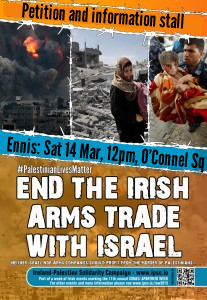 To mark International Israeli Apartheid Week, we will be leafleting and collecting signatures on a national petition against the Irish arms trade with Israel. Please join us if you can, we’re starting in O’Connell Square, Ennis at 12 noon on Saturday 14th March.

We hope to see you there.