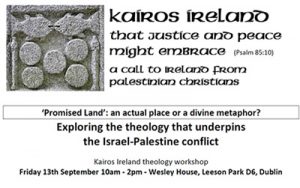 Palestinian Christians are offended by the way the Old Testament has been used politically to support a Zionist narrative – that God has given the Jewish people a divine right to biblical Israel because of the covenant that He made with Abraham and his descendants. Many religious Jews who have emigrated to Israel have claimed this privilege in their hearts and on the land: in the words of an American Jew who has returned to live in Jerusalem: “The God who creates the world can decide to give this land to the Jewish People.” Many Reformation Christians have supported this theological narrative since the 16th century and continue to affirm the special right of the Jewish people to historic Palestine. This narrative has also been embraced by politicians, who have used religious arguments to make way for the Jewish homeland project and legitimise the confiscation of Palestinian land.

Today, having suffered from a dispossession process underway since 1947, Palestinian Christians have begun to see the political misuse of the Bible as the Faith Nakba [Rev Naim Ateek]. When they read the New Testament, they see the teachings of Jesus, Peter and Paul providing another perspective that rejects the notion that God chooses one people to worship Him on one particular mountain.

• What does the Old Testament actually say about the Promised Land and for whom?

• Are God’s promises to ancient Israel unconditional and never ending?

• How does God have a special plan for the Jewish people different from His plan for other peoples who have kept the same covenant?

• How do New Testament teachings relate to Zionist understandings of entitlement?

• What has been the impact of the Christian Zionist narrative locally among Palestinians?

These are the kind of theological questions we will be exploring with a specially invited panel of speakers. They have thought about these questions for some time in the light of the systematic land dispossession. They will also address issues such as the Battle of Narratives and how the Kairos movement within the churches has responded to the challenge. Active dialogue will follow between the panel and participants.