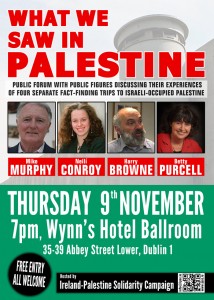 Entry is free and all are welcome, especially others who have visited Palestine and want to contribute their own experiences from the floor.

Over the past number of years hundreds of Irish people have visited Palestine to see for themselves the reality on the ground for the Palestinian people as they struggle for survival under the Israel’s brutal military occupation, enduring frequent war crimes, flagrant international law violations and severe human rights abuses. Many of these visitors have been well known-public figures, and we are honoured to host this discussion featuring four of these prominent people – and encourage you to come along to hear from them. It is clear that Israel so fears such first-hand accounts that it has started banning Irish people from entering Palestine .

Betty Purcell, who will moderate the proceedings, is an Irish Human Rights and Equality Commissioner, freelance television producer and media consultant. Previously Betty worked as a Senior Television Producer with RTE and over 33 years has produced countless radio and television programmes. Betty has written a book on broadcasting Inside RTE (New Island, April 2014) and on Nicaragua Light After Darkness (Attic Press, 1987). In October 2015 Betty visited the West Bank on an olive harvesting trip.