[Dublin] Vigil for Gaza: Putting the Israeli embassy under ‘siege’ 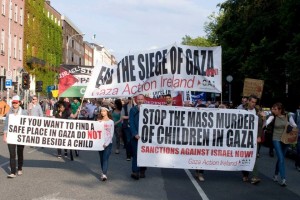 A vigil to call for the immediate expulsion of the Israeli ambassador and to remember those murdered in Gaza in recent weeks will be held at the Israeli embassy in Dublin on Thursday 21st Aug at lunchtime. We are gathering to call for an end to the murderous Israeli war on the civilians of Gaza and for a lifting of the siege.

This is part of a symbolic, peaceful ‘siege’ of the embassy calling for the immediate closure of the Israeli diplomatic residence in Ireland. We should not allow diplomatic status to be accorded to the representatives of a terror state.

Please attend and bring your friends!!

Ambassador Modai and his team are apologists and spokespersons for war criminals, for a regime that in the past month has murdered up to 2,000 Palestinians in Gaza including hundreds of children. They have Gaza under siege, let us put them under siege until the Israeli ambassador is told to pack his bags and leave Ireland.

Assembling at 1pm outside the Israeli embassy at 122 Pembroke Road, Dublin.