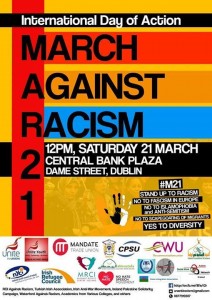 #M21Ireland – A broad, democratic initiative for the ‘UN Anti Racism Day Rally’, called and organised by a number of anti-racist groups, civil society associations, NGOs, trade unions and others. The Ireland-Palestine Solidarity Campaign is proud to be a supporting organisation.

Assemble 11:30 at Central Bank Plaza, Dame Street, Dublin 2, followed by a march to Garden of Remembrance.

Hopefully with the busy city centre our message of anti-racism and diversity will have a huge exposure.

For details on the campaign please go to
https://www.facebook.com/M21Ireland

21st March 2015 is the “UN INTERNATIONAL DAY AGAINST RACISM”, a day when the people across the globe show their opposition to racism and discrimination. This annual event declared as a memorial by the United Nations in response to the murder of 69 anti-apartheid demonstrators in Sharpeville, South Africa, in 1960. Proclaiming the day in 1966, the United Nations General Assembly called on the international community to redouble its efforts to eliminate all forms of racial discrimination.

Various events and negative developments around the world show us the importance of fighting against every type of racism, hatred at every level and promote unity and solidarity among people.

Organised by the #M21 Ireland Collective.
Supporting organisations in no particular order
(List to be further updated as confirmations of support are received)

ACADEMICS FROM SCHOOL OF APPLIED LANGUAGE AND INTERCULTURAL STUDIES

ROI SAYS NO TO RACISM