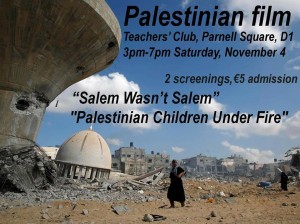 On Saturday November 4th two Palestinian documentary films will be screened in The Teachers’ Club, 36 Parnell Square West, Dublin 1. The screenings will run from 3pm to 7pm, and feature live video link ups with the directors after each screening.  Entry is €5.

The first of the two films is entitled “PALESTINIAN CHILDREN UNDER FIRE“. It is a documentary commissioned by Palestinian activists from the North of Ireland and is a testimony to the arrest and murder of Palestinian children from the formation of the state of Israel in 1948 to the present day.

“The documentary is aiming to mobilize supports and activate audiences to:
Expose the war crimes of the Zionist Colonial State against Palestinian Children
Isolate the Zionist Apartheid System

The second of the two films is SALEM WASN’T SALEM (Salem Wasn’t Safe). This is the true account of a young man killed by a sniper bullet during the war on Gaza in 2014. The film is told by his good friend, human rights activist and film maker, Mohammed AbedAllah.
As they work their way through bombed out buildings searching for survivors of the latest bombarding on Gaza, Salem was shot by an Israel sniper. Mohammed quickly captured images of Salem as he lay dying and struggling to get up. Despite doing everything possible the solidarity activists were unable to reach him and seconds later he was shot again leaving friends devastated metres from his side. The video of the murder of young Salem, was quickly uploaded and broadcast by news outlets around the world.

Today Palestine remains under blockade. These are films not to be missed. Following on from each of the film showings there will be live link up with the film makers respectively that will allow questions and answers and facilitate interactive conversation.