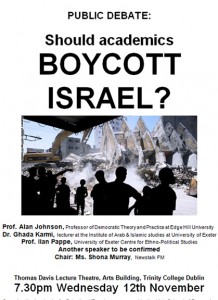 Debate on the academic boycott of Israel

The debate, hosted by the Irish School of Ecumenics at TCD and organised by Academics for Palestine (AfP), is open to the public and admission is free.

Alan Johnson is Professor of Democratic Theory and Practice at Edge Hill University in Lancashire. He is also a senior research associate at the London-based Foreign Policy Centre and blogs about international issues at the World Affairs website under the title “Idealism Without Illusion”.

Ghada Karmi, a fellow and lecturer at the Institute of Arab and Islamic studies at Exeter, is a doctor of medicine as well as a writer. She has authored many books, including the memoir In Search of Fatima: A Palestinian Story and Married to Another Man, in which she argues for a single state for Arabs and Jews in Palestine.

Ilan Pappé, perhaps the leading historian of the origins of the state of Israel, is the author of seminal works including A History of Modern Palestine and The Ethnic Cleansing of Palestine. Born in Haifa, Israel, where he lectured for many years, he is now a professor at the University of Exeter, and one of the leading Israeli advocates of boycott, divestment and sanctions (BDS) against Israel.

The debate will feature one other speaker and is chaired by journalist Shona Murray of NewsTalk radio.