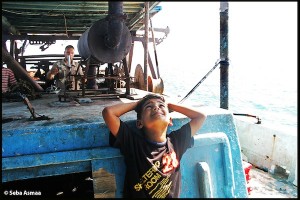 Tues 7th – Thurs 9th July, 9.30am-8.30pm
Admission free, donations welcome
‘Sumud // Steadfastedness’ brings together three photographic projects about Gaza.
Six children who witnessed massacres during Israel’s 2008/09 bombardment were given cameras and tutored by Belgian photographer Asmaa Seba. The result is ‘Gaza Seen By Its Children’, 24 photos taken by the children in 2012-13 that have been shown around the world.
Beside this is ‘Obliterated Families’ by French photographer Anne Paq, whose subject is the extraordinary statistic that in the 2014 Israeli offensive 142 families in Gaza lost three or more members.
Finally, Palestinian photographer Fatin Al Tamimi, who has lived in Ireland since 1988, has documented acts of solidarity with Palestine in Ireland.

‘Sumud // Steadfastedness’ is part of PalFest Ireland, a volunteer run arts festival organised by Irish Artists in support of Palestine to demonstrate solidarity between the Irish arts community and the people of Palestine.Organised by PalFest