[Dublin] Stop the Attack on Gaza: Demonstration @ The Spire 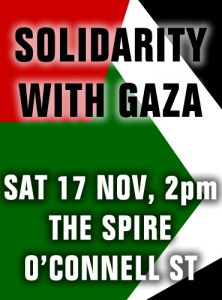 On Wednesday Israel launched what it termed ‘Operation Pillar of Cloud’ on the population of Gaza. In reality, this is just the continuation of over a week of military assaults on Gaza which in total have left at least 27 Palestinians dead (22 since Wednesday), including 9 children, and scores wounded. An Israeli military spokesperson said this is was the beginning of a “widespread campaign” on Gaza.

Please take to the streets on Saturday to protest this outrageous attack on the already besieged Palestinian population in Gaza. We must demand an end to such actions and that our government and the international community take meaningful concrete steps to end Israeli impunity once and for all.

Assemble at 2pm at the Spire, O’Connell Street, Dublin 1 on Saturday 17th November.