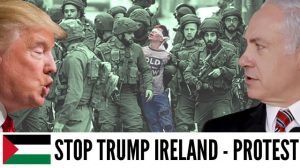 The Ireland-Palestine Solidarity Campaign is one of over fifty groups who in the Stop Trump Ireland Coalition who will be taking to the streets on On Thursday 6th June* at 6pm at the Garden of Remembrance, Parnell Square, Dublin 1. Join us to say no to the visit of this dangerous anti-Palestinian racist, enabler of Israeli apartheid, and vicious enemy of environmental sustainability and our planet.

6 REASONS TO OPPOSE TRUMP:
* He is destroying the planet
* He is an imperialist warmonger
* He is the world’s leading misogynist
* He is a racist, Islamaphobe and Apartheid Israel supporter
* He is a vicious transphobe
* He represents the 1%

WHY TRUMP IS NOT WELCOME IN IRELAND

Donald Trump is a threat to us all.

As the world’s leading climate change denier who has pulled the US out of the Paris climate agreement, removed environment protection in America he is destroying the planet and endangering the whole future of humanity. He is a strong promoter of importing fracked gas into Ireland via Shannon LNG.

In the age of #MeToo, when women globally are standing up for their rights, he has boasted of his ability to sexually assault women with impunity.

His Presidential campaign was based on racism against Mexicans –build that wall! He has tried to ban visitors and migrants from Muslim countries. He is separating children from their parents at the border.

He gives carte blanche support to Apartheid Israel to murder Palestinians and steal their land at will.

He has worked with, encouraged and emboldened far right racists and fascists across the world.

He is undermining Irish neutrality via Shannon.

He is a vicious transphobe who bans transgender people from the US Army.

He has posed as the friend of ‘the working man’ but in reality he is a billionaire property developer who represents the interests of the super rich. He filled his cabinet with CEOs, and generals.

This is why as a coalition of progressive campaigners and activists we all say TRUMP IS NOT WELCOME IN IRELAND!

We call on the Irish Government, which claims to be progressive, to make this clear to Donald Trump and to ensure that no public money, so urgently needed for the housing and health crisis, is spent on this visit.

If Trump does visit Ireland we will PROTEST!
Stop Trump Ireland

The rally in 2018 was cancelled following Trump’s decisions not to visit Ireland. Recently the various group had an email communication re-iterating the willingness to get together should Trump visit Ireland in 2019. This event is created based on discussions at various meetings.Should Trump’s visit be a definite the organising groups will finalize the details