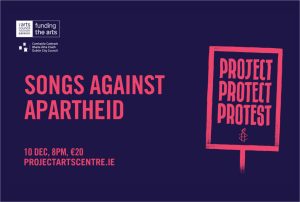 This event is part of PROJECT PROTECT PROTEST, a weeklong act-in for future protest at Project Arts Centre. Check out the full programme here.

Hosted by Senator Frances Black, Songs Against Apartheid is a gig to platform several artists to stand for human rights and to call for the end of Israel’s apartheid system against the people of Palestine. The gig is an evening of music, singing, spoken words and rap where artists will talk about their experience visiting Palestine or growing up as Palestinians under apartheid. The gig includes SÍomha, Saied Silbak, Roisin El Cherif, Talha and a few more. Come along and show your support for Palestine! End Israel’s Apartheid now!

Síomha
“Síomha draws on a deep well of soul. This music transcends boundaries in a way I’ve never heard. And every second of every song is rooted in groove.” – JOE DART (Vulfpeck)

Independent Irish singer and guitarist Síomha (pronounced She-vah) dances the line between folk, jazz and neo-soul effortlessly taking audiences on an unexpected and unforgettable journey with her soulful melodies. Her debut album ‘Infinite Space’ – described by The Irish Times as “a seriously accomplished and self-confident debut” – is a collection of songs in both Irish and English. A kind of cosmic, folk-informed, jazz-tinged, post-pop – it was produced by GRAMMY-nominated Tyler Duncan and features an all-star lineup of musicians including Joe Dart (Vulfpeck), Louis Cato (Bobby McFerrin/ Snarky Puppy), Martin Atkinson Borrull (Toucan) and violinist Jeremy Kittel (Bela Fleck/ Chris Thile). Síomha’s voice is full of raw heart-felt experience. When listening to her, audiences are instantly moved to feel on the deepest level and come out more intimately connected to their own worlds.

Coming from a family steeped in music, Síomha grew up on a diet of musical greats with the sounds of jazz, trad, folk and soul creeping in and leaving an indelible mark on her musical tastes and influences. She started playing guitar at age 10 but it was later in her teens while attending high school in the south of France that she first took up jazz guitar after a chance encounter led to her learning from an Italian gypsy who taught her the manouche gypsy jazz style. The chords and sounds of jazz fascinated and inspired Síomha and she began to craft her own songs.

The next few years saw her traveling, with music as her compass, soaking up the sounds of each of the places she traveled and further honing her craft. In late 2016, having traversed America, Canada and Mexico, she felt an innate draw to return to home shores and a phenomenal few years have followed. Síomha toured with Paul Brady, Wyvern Lingo, Moxie, Joey Dosik (Vulfpeck), Notify and has performed at festivals such as Electric Picnic, Celtic Connections (Glasgow) and Fête de la Musique at Centre Culturel Irlandais in Paris. In 2018, she was invited to tour with celebrated contemporary American-Irish group the olllam and instantly formed a bond with founding member Tyler Duncan. In 2019, Síomha and her long term creative collaborator Martin Atkinson began recording her debut album in Michigan, USA with Tyler as producer.

Síomha is an artist full of heart and her music truly does defy any conventional genres. The influences of her musical background, her travels and musical explorations are audible in the music she creates. Always proud of her Irish heritage, she performs her songs in both the English and Irish languages. The beautiful landscape and rugged nature of her native West of Ireland are a huge source of inspiration for this proud Co. Clare artist leading her to create a soulful and unique style of music that enthralls anyone who hears it.

Talha
A Palestinian human rights activist, performer, lyrists and hip-hop artists. Talha started fighting for political change and social justice in Palestine at a young age through hip-hop music and theatre in the early 2000s. Talha’s performances reached Palestine, Jordan, Egypt, Denmark and Switzerland and shared the stage with international hip hop artists such as M1 from Dead Prez, Massiv from Germany, Lowkey from the UK, DAM from Palestine and Musallam from Jordan and many other names.

Talha held workshops on creative writing and on self-expression through hip-hop in Secondary Schools in Copenhagen. As well as holding workshops in refugee camps in Palestine and Jordan.
Talha’s passion for empowering people did not stop at music and theatre. He graduated from university as a counsellor and psychotherapist and continued his post-grad in mental health to work as a therapist for a few years. However, he is still answering calls to perform in support of human rights in Palestine and around the world.

Saied Silbak
Saied Silbak is a Palestinian composer and Oud player born in Shafaa`mr, a city located in the lower Galilee of occupied Palestine. He began training in classical piano at the age of four, before moving onto the oud in his early teens in order to delve deep into the nuances at the base of Arabic music.

Silbak went on to train at the Beit Almusica Conservatoire where he later taught, before studying Music and Psychology at the university of Haifa and then completing his Masters at the Guildhall School of Music and Drama in London, where he is currently based.

He has a unique understanding of different types of music, from Arabic, Turkish and Indian to classical Western styles. Silbak’s signature sound, created through his artful ability to fuse these styles together, has seen him perform around the world at festivals and concert series in the UK, Belgium, France, Palestine, Morocco, Argentina and beyond.

Roisin El Cherif is an Irish/Palestinian artist hailing from Galway, who took to the stage in 2016.

Following the release of her single, Kerosene, Roisin played at the Ruby Sessions, Whelan’s, the Grand Social, the Globe and the Roisin Dubh in Galway. She performed at Body&Soul and was selected out of 400 submissions to play the Unsigned Act at Sea Sessions. Other performances included Electric Picnic, Canalaphonic, Battle for the Lake – Achill, a headline show in Whelan’s and support for Ham Sandwich in the Roisin Dubh.

Roisin spent 2017 extensively writing and recording her debut EP, Half A Life, with notable performances at Youbloom, Canalaphonic, Sunflower Festival, Electric Picnic, Roisin Dubh, Ruby Sessions and the Workman’s. During this time, Roisin was personally selected by Ken Callait (Producer of Fleetwood Macs Rumours) to take part in ArtistMax, a songwriting workshop in LA during March.

Half A life is available on all digital platforms.