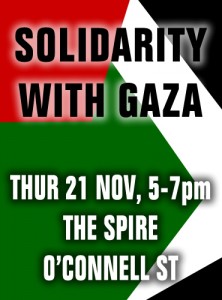 Join us from 5pm until 7pm at the Spire on O’Connnell Street on Thursday 22nd November for a vigil for the people of Gaza, who has been bombed by Israeli forces for over a week.

This has resulted in at least 36 Palestinians killed by Israeli occupation forces. Of those, 92 are civilian – 28 are children and 13 are women and civilians make up two thirds of the casualties. Of the 941 injuries, 922 are civilians, and numbered among them are 258 children and 149 women.

Can’t make it? Here are 5 simple things you can do to help stop the Israeli attacks on Gaza.