[Dublin] Shawan Jabarin: The Great March of Return, Israel’s Assault on Gaza & the Struggle for Justice in Palestine (AFP & IPSC) 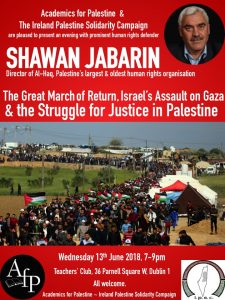 The Great March of Return, Israel’s Assault on Gaza & the Struggle for Justice in Palestine

In this timely and important talk, pre-eminent Palestinian human rights defender
Shawan Jabarin will address recent developments in Gaza: the remarkable mass
movement that emerged in the form of the Great March of Return, and the
response of the Israeli military – including the use of lethal force and explosive
bullets against civilians, as well as open-fire rules of engagement that have been
approved by the Israeli Supreme Court. Jabarin will also address the diverse range
of ongoing attempts to hold Israel to account for its violations of international
law in the Palestinian territories – from potential war crimes investigations by the
International Criminal Court to forthcoming proposed legislation in Ireland to
ban trade with illegal settlements in occupied territories.

Shawan Jabarin is the General Director of Al-Haq, the largest, oldest and best
known human-rights organization in the Palestinian territories. In 2011 he was
appointed to the Human Rights Watch Middle East Advisory Board, and in 2013
he was elected as a Commissioner for the International Commission of Jurists. In
2016 he was elected Secretary-General of FIDH: International Federation of
Human Rights.

After studying sociology at Birzeit University in the 1980s, Jabarin later studied
law in Ireland. He is a graduate of the Irish Centre of Human Rights, NUI
Galway, where he completed the LL.M programme in 2004-05, supported by a
grant from the Irish Department of Foreign Affairs Irish Aid programme. In
2010, the Irish Centre of Human Rights presented him with its first and only
distinguished graduate award.

Jabarin began volunteering with Al-Haq while he was a student at Birzeit
University. He joined Al-Haq as a field researcher in 1987. He became its director
in 2006. He has been subject to administrative detention without trial, travel bans
and death threats for his work as a human rights defender, and has been
supported in campaigns by Amnesty International, Front Line Defenders, Israeli
human rights organisation B’Tselem, and others. He was awarded the Reebok
Human Rights Award in 1990 for his defence of freedom of expression and
human rights, and has been received numerous other human rights awards since,
personally and on behalf of Al-Haq.

Organised by Academics for Palestine in association with the Ireland-Palestine Solidarity Campaign.