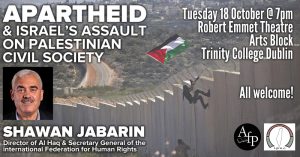 The Ireland-Palestine Solidarity Campaign, in association with Academics for Palestine and the TCD Mphil in Race, Ethnicity, Conflict, are honoured to host a timely and important evening with preeminent Palestinian human rights defender Shawan Jabarin, Director of Al Haq, and a Secretary General of the FIDH, the International Federation for Human Rights.

The event will see Shawan in conversation with Dr. John Reynolds, an international law lecturer in Maynooth University and member of Academics for Palestine. Their discussion will be followed by a question and answers session with the audience.

Students, academics and the general public – all are welcome!

Shawan Jabarin is the General Director of Al-Haq, the largest, oldest and best known human-rights organization in the Palestinian territories. In 2011 he was appointed to the Human Rights Watch Middle East Advisory Board, and in 2013 he was elected as a Commissioner for the International Commission of Jurists. In 2016 he was elected Secretary-General of FIDH, the International Federation of Human Rights.

After studying sociology at Palestine’s Birzeit University, Jabarin later studied law in Ireland at the Irish Centre of Human Rights in Galway University.

Organised by the Ireland-Palestine Solidarity Campaign, in association with Academics for Palestine and the TCD Mphil in Race, Ethnicity, Conflict.