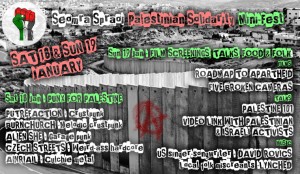 On the Saturday 18th & Sunday 19th of January 2014, Seomra Spraoi will be hosting a weekend of music, politics and craic in aid of Anarchists Against the Wall and the Bil’in Popular Committee Against the Wall.

With information stalls from:

3pm – Film Screening: Roadmap to Apartheid – Trailer here
Followed by Palestine 1010 Q&A session: Palestine, Israel and everything in between.

Narrated by Alice Walker (author of The Color Purple), Roadmap To Apartheid is as much a historical document of the rise and fall of apartheid in South Africa as it is a film about why many Palestinians feel they are living in an apartheid system today, and why an increasing number of people around the world agree with them. The viewer sees what life is like for Palestinians in the West Bank, the Gaza Strip and inside Israel while gaining a deeper understanding of the conflict with the help of informed analysis on the subject.

Following the film there will be a ‘Palestine 101’ Questions and Answers session.

5.30pm – Film Screening: 5 Broken Cameras – Trailer here
Followed by a video link up with Palestinian and Israeli activists on the ground

A deeply personal, first-hand account of non-violent resistance in a West Bank village threatened by encroaching Israeli settlements. Shot almost entirely by Emad Burnat, a Palestinian farmer, the Oscar nominated and award winning film is an extraordinary work of both cinematic and political activism.

Although he never planned to be a film-maker, Burnat proves to be both a brave and an extraordinary one, keeping his camera rolling amidst frightening scenes of unpredictable aggression, often aimed at himself, in a film richly deserving of its many awards.

The screening will be followed by a video link with Saaed Amireh from the Nil’in popular committee against the wall, and an Israeli activist from Anarchists Against the Wall.

followed by FOOD and then at

Organised by the Seomra Spraoi Collective