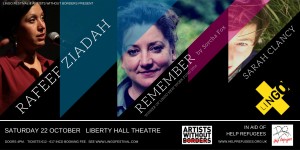 Join the Lingo Festival on Saturday 22nd October from 4pm to 6.30pm in Liberty Hall (Eden Quay, Dublin 1) for an inspiring evening of words featuring a triple-bill of some of poetry’s top voices of protest and outcry, with Rafeef Ziadah, Sorcha Fox and Sarah Clancy. Presented by Lingo Festival in partnership with Artists without Borders, in aid of Help Refugees.

Rafeef Ziadeh, a Palestinian spoken word artist and human rights activist. Her performances of poems like ‘We Teach Life, Sir’ and ‘Shades of Anger’ went viral online within days of their release and have been viewed over a million times. Rafeef’s poems continue to be a rally cry for action against injustice and a potent rendition of the everyday lives of ordinary people in the Middle East. We Teach Life, her second album, is a powerful collection of spoken word with original music compositions.

Lingo is delighted to present the world premiere of Remember, an extended piece by Sorcha Fox, the winner of Lingo’s New Work Fund, supported by Dublin UNESCO City of Literature.

Remember is a challenge – personal and political, to look at Ireland and our role in it. It is a call to action and a challenge to listen to and amplify the voices of those who hold the seeds of who we might be.

Also on the bill is Lingo’s 2016 Poet Laureate Sarah Clancy, a poet form Galway who is a key voice for change in Ireland. She is winner of the inaugural Irish People’s Poetry Prize, and was runner up in the All Ireland Grand Slam Championships in 2013. Clancy is the author of three collections of poetry, including The Truth and Other Stories ( Salmon Poetry, 2014), Stacey and the Mechanical Bull (Lapwing Press, Belfast, 2011) and Thanks for Nothing, Hippies (Salmon Poetry, 2012).

A dynamic, powerful night – not to be missed.

Age suitability: 12 years + with parental guidance. Children under 16yrs must be accompanied by an adult.

******
All proceeds will go to Help Refugees, a grassroots humanitarian aid organisation formed in August 2015 in response to the refugee crisis. Primarily working where large NGOs are unable to operate, Help Refugees fill a vital gap and act fast, reacting quickly to keep people alive and to secure their most basic needs of food, shelter, clothes and medical care.

They are now the largest provider of aid in Calais and one of the few NGOs getting aid into camps across mainland Greece, as well as in Paris, Turkey and Lebanon to tens of thousands of refugees every day. Help Refugees work fast to get aid directly to the people who need it most. They estimate to have helped approximately 200,000 refugees over the past year. See http://www.helprefugees.org.uk/ for more.

Help Refugees is registered as a charitable fund in the UK (under the auspices of Prism the Gift Fund) – charity number 1099682.

Organised as part of the 2016 Lingo Festival.