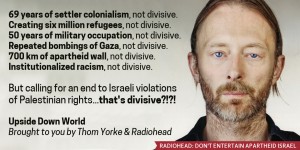 Renowned rock band Radiohead plan to perform in Israel on 19th July in violation of the Palestinian call for a cultural boycott of the Israeli state. Before going to Israel, they will be playing in Dublin’s 3 Arena on Tuesday 20th June. In solidarity with the Palestinian people, and in support of the boycott call, the IPSC is holding an action at the 3 Arena on that date from 5 to 8 pm.

We will be leafleting to inform Radiohead fans entering the gig about their proposed breach of the boycott and asking them to show the band that they do not approve of the band playing apartheid.

Even if you can’t make the protest, you can take action online – see here!

Radiohead’s decision to play Israel has shocked and upset many of their fans, especially as the band is one with a self-professed social conscience. The Palestinian Campaign for the Academic and Cultural Boycott of Israel (PACBI), Boycott from Within, Artists for Palestine UK and Radiohead Fans for Palestine have all written to the band calling on them not to cross the Palestinian picket line. Among those who have reached out to Radiohead are Ken Loach, Roger Waters, Desmond Tutu, Maxine Peake and Juliet Stevenson. Thus far to no avail, but there is still time for them to do the right thing.

Since the announcement of the gig in Israel and the commencement of their tour, Radiohead fans have called on the band to cancel at all of their gigs so far, we plan to do the same in Dublin.

After 69 years of apartheid, ethnic cleansing and dispossession and 50 years of military occupation, the Palestinian people must have justice. All Radiohead are being asked is to do no harm and to respect the boycott call. They can choose to be on the right side of history, not to sit down for but to stand up to apartheid.