[Dublin] Public Meeting: The Hijacking of the MV Saoirse and the Siege of Gaza 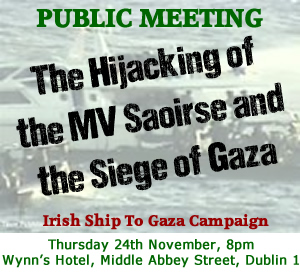 On Friday 4 November, the Freedom Waves to Gaza flotilla was surrounded and attacked by up to 20 vessels from the Israeli navy. The Freedom Waves ships – the ‘Tahrir’ (from Canada) and the ‘Saoirse’ (from Ireland) – were in international waters when the intervention occured and roughly 40 nautical miles from the port of Gaza. Both ships were hijacked with violence and the 27 crew and passengers – including 14 Irish citizens – were then taken against their will to Israel where they were held in prison for a week before being ‘deported’.

At this meeting, several of the Irish citizens who participated in the Freedom Waves flotilla will talk about their experience and will explain why they attempted to breach the illegal Israeli blockade of Gaza aboard the MV Saoirse. Plenty of time will be allocated for discussion.

Admission is free and all are welcome!!!!

Organised by the Irish Ship to Gaza Campaign