[Dublin] Palestine, Israel & International Law: The ICC and beyond (with Shawan Jabarin and Dr Michael Kearney) 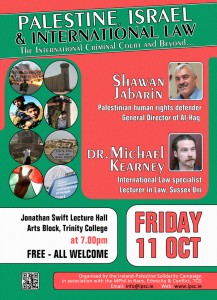 The Ireland-Palestine Solidarity Campaign is proud to host an evening with two esteemed experts on international law and the Palestinian/Israeli question, Shawan Jabarin of Al Haq and Dr. Michael Kearney of Sussex University. Mr. Jabarin is fresh from the Hague, where he was meeting with the International Criminal Court in an attempt to convince them to investigate ‘commission of crimes’ by Israel in the occupied Palestinian territories.

Apart from taking about this venture, the meeting will look more generally at Palestinian legal resistance to the Israeli occupation and colonisation of the Palestinian territories, the applicability of international laws to the situation, and what the picture on the ground looks like today. There will also be time for a Q&A after the speakers have finished their presentations.

The meeting will take place on Friday 11th October at 7.00pm in the Jonathan Swift Theatre, Arts Block, Trinity College, Dublin 2. The event is free, and all are welcome.

We are especially exicited to have Shawan Jabarin with us, as between 2006 and 2012 he was subject to a travel ban by Israel, effectively imprisoning him in the West Bank for his human rights work.

Shawan Jabarin is a Palestinian human rights defender who has been a leading advocate and activist for human rights and social justice in Palestine since the 1980s. He spent a total of six years interned in Israeli prison without charge or trial during the 1980s and 90s. Since 2006, he has been the General Director of Al-Haq, which is an independent, Palestinian non-governmental organisation based in the West Bank. The organisation was founded in 1979 by Palestinian lawyers and is the oldest human rights organisation in the Middle East. Through its field workers, who work across the West Bank and Gaza, Al-Haq investigates possible violations of human rights by both Israeli and Palestinian authorities.

Shawan Jabarin is a graduate of the Irish Centre of Human Rights, NUI Galway, having completed the LL.M programme there in 2004-5 through a grant from the Department of Foreign Affairs’ Irish Aid programme. In November 2010, he was awarded the distinguished graduate award from the first ten years of the Centre’s activities. He was unable to come to Ireland to collect his award in person due to a blanket travel ban that had been imposed on him by the Israeli authorities in 2006, upon his promotion to General Director of Al-Haq. Despite repeated appeals by Israeli lawyers and the international diplomatic community, this travel ban prevented him from leaving the West Bank for six years, before being partially lifted in 2012. Mr. Jabarin is in Ireland to participate in the Front Line Human Rights Defenders Platform and has kindly agreed to take part in this meeting while here.

Dr Michael G Kearney is Lecturer in Law and convenor of the LL.M in international criminal law at the University of Sussex. He has previously been Fellow in Law at the London School of Economics (2010-12), and RCUK Fellow in law & human rights at the University of York (2006-9).  Michael received his BCL from University College Cork in 2001, and an LLM in international human rights law (2002) and PhD (2006) from the Irish Centre for Human Rights, NUI Galway. He worked with Al-Haq as a legal researcher in 2009-10, and has written extensively on legal aspects of the situation in Palestine.