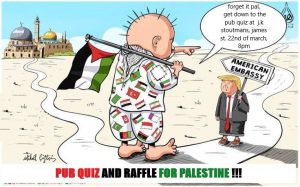 Last week we received an email from a friend who is a coordinator for the Balata refugee camp near the West Bank city of Nablus in Palestine.

Balata camp is the most overpopulated refugee camp in the west bank with 30,000 residents living in 0.25 sq Km and having personally visited the camp twice, we can safely say the living conditions are as dire as you would imagine. over crowding, poverty and the occupation has paved the way for an epidemic of mental disorders (mostly children), illness and drug use. Due to lack of space and funding, structures are thrown on top of each other while the narrow streets are filled with waste, rodents and children. And as we found out last week due to American and German aid cuts, the remaining social programs (again primarily for children) are being seriously threatened.

So a few of us have decided to organise a fundraiser to show support and solidarity to the people there who work tirelessly to give children some respite from the oppression of the Israeli occupation and crippling poverty.

So come on down to JK Stoutman’s Pub, 131 James’s Street, Dublin 8 on Friday March 29th and  have some craic, defy an apartheid regime and show your solidarity with Palestine and the great men and women from Balata refugee camp who prove every day that “existence is resistance”.

Here is a link to an article explaining how live is in Balata refugee camp https://972mag.com/balata-refugee-camp-funding-ycc/140071/

Organised by members of People Before Profit