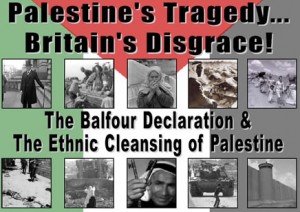 On November 2nd 2017, please join us between 1pm and 2.30pm for a symbolic lunchtime protest at the British Embassy in Dublin to commemorate the centenary of the issuance of the ‘Balfour Declaration’ by the British Empire, which promised historic Palestine to the Zionist movement against the wishes of the Palestinian people – thus laying the foundation for waves of ethnic cleansing and the ongoing colonisation of Palestine by Israel.

The protest will highlight the role of British imperialism in the partition of Palestine, and its collaboration with the crimes and abuses of the Israeli state against the Palestinian people ever since – and call for end to this collusion and for freedom, justice and equality for Palestinians.

On 2nd November 1917, in furtherance of its imperial ambitions in the Middle East, the British Government under Lloyd George made a promise to the Zionist Federation that it would ‘establish a national home for the Jewish people’ in Palestine. This promise, contained in a letter sent by Lord Arthur Balfour, the Foreign Secretary, to Baron Rothschild, was made without consulting the people of Palestine who hoped for independence from the imperial powers. It came to be known as the ‘Balfour Declaration’.

From the ethnic cleansing of Palestine between 1947 and 1949, to the occupation of the West Bank and Gaza which has entered its 50th year, to the continued land theft and colonisation of Palestinian land with illegal settlements, to frequent attacks on Gaza, to the imprisonment and torture of hundreds of thousands people, to flagrant human rights abuses – the people of Palestine continue to live with the disastrous legacy of Balfour.