[Dublin] Protest: No Welcome for Israeli Foreign Ministry at the OSCE Dinner 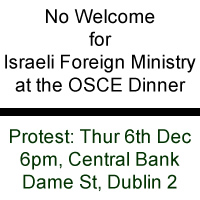 On Thursday 6th December the Organisation of Security and Cooperation in Europe (OSCE) will be meeting in the RDS. The meeting will be followed by a dinner at Dublin Castle.

Present at both the meeting and dinner will be a delegation representing the Israeli Foreign Ministry; therefore the Ireland-Palestine Solidarity Campaign (IPSC) is supporting the demonstration called by the Irish Anti-War Movement (IAWM) to take place at 6pm at the Central Bank Plaza, Dame Street, Dublin 2.

This event and dinner is taking place only two weeks after the end of the 8-day Israeli bombardment of Gaza which killed at least 160 Palestinians and wounded over 1000 more. In the intervening period, Israel has on several occasions broken the Egyptian negotiated ceasefire, including killing one man, firing on farmers and arresting fishermen, and maintains its illegal siege of the area. The IPSC believes that it is insulting and incredible that our country should play host to a delegation from Israel in this context. Ironically, this conference will have as its special focus the rights of journalists and human rights defenders. Israel killed three journalists and bombed media facilities during the recent attack on Gaza, and has regularly come under international criticism for its imprisonment of human rights defenders.

That Israel can be invited to partake in such a meeting and reception after yet another brutal attack on the Palestinian people will merely add to the impunity it enjoys. As states refuse to hold Israel accountable for its crimes, ordinary people must.