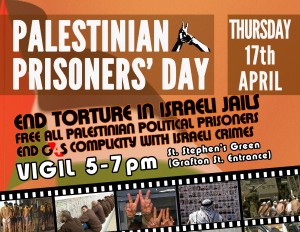 To mark Palestinian Prisoners’ Day, the IPSC will be holding a vigil highlighting the  scandalous role of the Anglo-Danish multinational security firm G4S in Israel’s prison system. We will gather at 5pm at the Grafton Street Entrance to St Stephen’s Green in Dublin 2.

(Note: Following the vigil we will be holding a film screening – more info here)

G4S is currently tendering for the JobPath contract with the Irish government. The IPSC believes that taxpayers’ money should not go to a company that is complicit in Israeli violations of international law and human rights rules. Even if you cannot make the vigil, we urge you to contact the Minister for Social Protection and make your concerns about G4S and JobPath known. Click here to take action.

G4S provides security systems for major Israeli prisons, including the Ketziot and Megiddo prisons that hold Palestinian political prisoners from occupied Palestinian territory, inside Israel in contravention of international law. The company has also provided equipment for Ofer prison, located in the occupied West Bank, and for Kishon and Moskobiyyeh detention facilities, at which human rights organisations have documented systematic torture and ill-treatment of Palestinian prisoners, including child prisoners. In February 2013, Jaradat Arafat died following alleged torture in a G4S-secured facility.

In addition to these unlawful activities, G4S provides equipment and services to Israeli checkpoints in the occupied West Bank that form part of the route of Israel’s illegal wall, and to the terminals isolating the occupied territory of Gaza. G4S holds contracts for the provision of equipment and services for the West Bank Israeli Police headquarters and to private businesses based in illegal Israeli settlements. The EU has recently issued a directive excluding trade with settlements in the occupied Palestinian territories. A panel of legal experts have concluded that G4S may be criminally liable for its activities in support of Israel’s illegal wall and other violations of international law.