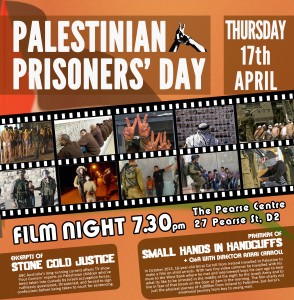 To mark Palestinian Prisoners’ Day, the IPSC will host a film night focusing on Palestinian child prisoners in Israeli jails. The film will be screened on Thursday 17th April from 7.30pm in The Pearse Centre, 27 Pearse Street, Dublin 2. ENTRY is FREE.

We are honoured to present the Dublin premiere of the new film ‘Small Hands in Handcuffs’ by young director Anrai Carrol from Waterford, which will be followed by a Q&A with the director.

We will also be screening excerpts from ‘Stone Cold Justice, a recent episode of ABC Australia’s long-running current affairs TV show ‘Four Corners’ which reported on Palestinian children who’ve been taken into custody by Israeli occupation forces, ruthlessly questioned, threatened, and forced to sign confessions before being taken to court for sentencing.