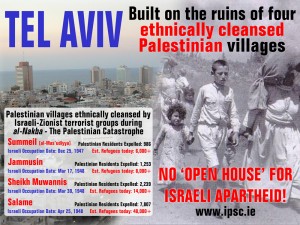 Dublin’s ‘Open House’ architectural festival has shamefully lent its name to an event sponsored by the Israeli Embassy in Ireland. This event, entitled ‘Postcards of our City’ which is due to be launched on at 6.30pm Thursday 4th October in Dublin Civic Trust (4 Castle St, Dublin 2), is the latest attempt by the Israeli state to use ‘cultural propaganda’ to whitewash its human rights abuses and war crimes against the Palestinian people. Those attending will be invited by the Israeli Embassy to send postcards to “random” residents of Tel Aviv.

In response, the Ireland-Palestine Solidarity Campaign (IPSC) will be organising a peaceful ‘Postcards for Palestine’ event outside, to remind those attending that far from “emerging from the sand dunes” – as the Israeli Embassy invitation to the event proclaims – Tel Aviv itself is, in part, built over the remains of four Palestinian villages – Sheikh Muwannis, Jammusin, Salame and Summeil which were ethnically cleaned by Israeli-Zionist military forces in the 1948 Nakba (‘Catastrophe’). To this day, the Israeli state maintains a policy of home demolition and settlement building in the Occupied Palestinian Territories. We will be inviting people to send postcards of solidarity to refugee families from the four depopulated Palestinian villages, denied their right of return to their homeland.

In a peaceful and respectful manner, we aim to highlight the hypocrisy of this event being a) part of the ‘Open House’ festival and b) staged by the Israeli state, considering Israel’s ruthless policy of historical and contemporary social and architectural destruction. We will meet at 5.45pm on the path outside the Lord Edward pub at Christchurch Place, Dublin 2. 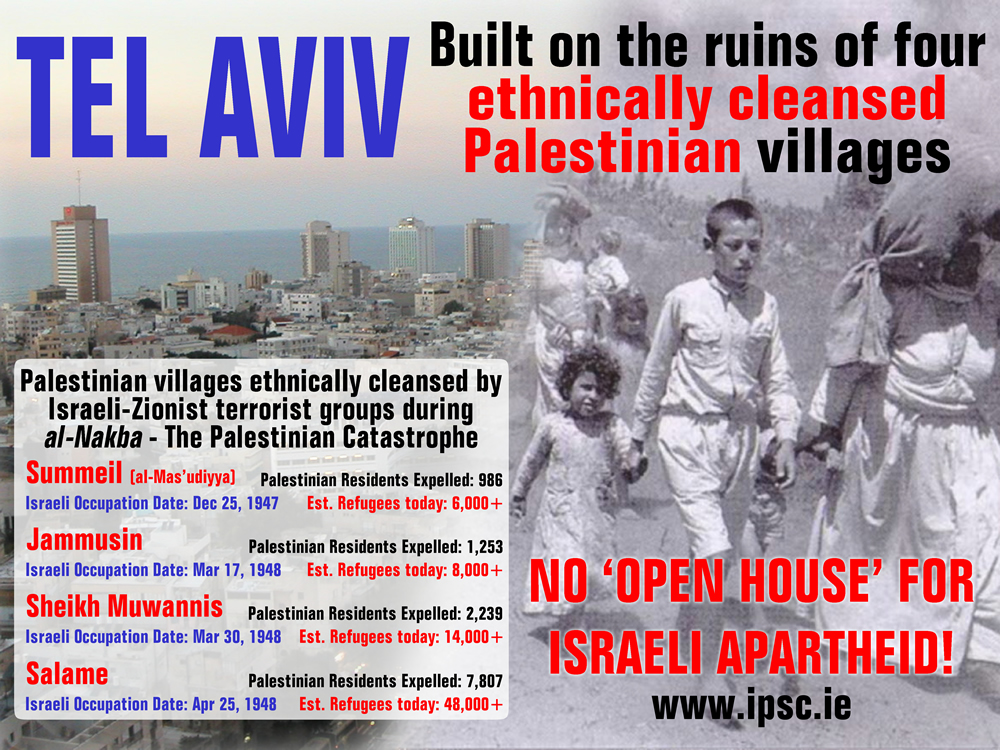