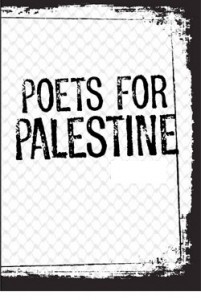 The five featured poets, who will read from their own work as well as a Palestinian poem of their choice, are Moya Cannon, Seamus Cashman, Catherine Ann Cullen, John Ennis and Adam Wyeth (short bios below). Fatin Al Tamimi, chair of the Ireland Palestine Solidarity Campaign and a photographer who has lived in Ireland since 1988, will lead Palestinian friends in reading favourite poems from their literature.

Further information about the event from Catherine Ann Cullen at cacullen@tcd.ie.

Moya Cannon has published five collections of poetry, the most recent being Keats Lives (Carcanet Press, 2015). A bilingual Spanish/English selection of her poems, Aves de Invierno, translated by the distinguished Argentinian poet, Jorge Fondebrider, was published by Editorial Pre-Textos in Spain in October 2015. She is a member of Aosdána.

Seamus Cashman set up Wolfhound Press in 1974. He has edited many books of poetry including Something Beginning With P (O’Brien Press 2004). His fourth collection, The Sistine Gaze, was published by Salmon in April 2015. Seamus was a judge for the 2013 International Mamilla Poetry Festival in Ramallah, and edited its English-language anthology.

Catherine Ann Cullen’s third collection of poetry, and first with Dedalus Press, The Other Now, is forthcoming in October 2016. She has also written two books for children and is researching a creative writing PhD in Middlesex University. She is a member of the Palfest Ireland committee and the Gaza Kids to Ireland campaign.

John Ennis has written many books of poetry. Two of his latest include Gaza Ground Zero (Bookhub, 2015, proceeds to Medical Aid for Palestine) and Eurydice 29 (Bookhub, 2016, proceeds to Herstory.ie). His sonnet “In Praise of Khalida Jarrar” will appear in the forthcoming In the Deep Heart’s Core anthology by Dedalus Press.

Adam Wyeth is a poet, playwright and essayist who was born in Sussex and lives in Dublin. His critical book, The Hidden World of Poetry: Unravelling Celtic mythology in contemporary Irish poetry (Salmon) was published in 2013. His second collection of poetry, The Art of Dying, will be published by Salmon in October 2016.