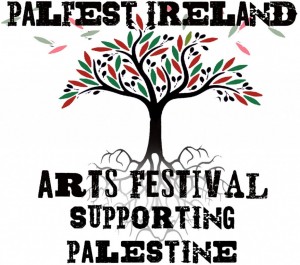 There is a great line-up of speakers, including Cathryn O’Reilly of the Dunnes Stores Strikers and historian Mark Garavan who will be highlighting the connection between Ireland, Palestine and the action of ‘Boycott’ – first invented in Ireland in 1880 and which has become a major method of peaceful resistance against Israeli Occupation in Palestine. IPSC Chairperson Fatin Al Tamimi will also speak.

A full programme of events will be launched, including theatre, film, literature, poetry, spoken word, talks and family activities. PalFest Ireland is a voluntary-run arts festival organised by Irish Artists in support of Palestine to demonstrate solidarity between the Irish arts community and the people of Palestine.

The Launch will be followed by a gig in the O’Reilly Theatre by Palestinian singer Ruba Shamshoum and David Rooney. For more details and to book tickets see here.