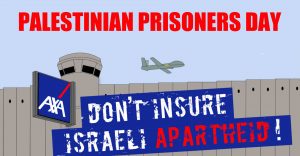 Join us for a lunchtime vigil on Palestinian Prisoners’ Day, this Wednesday 17th April between 1pm and 1.45pm outside the AXA’s Dublin offices on Wolfe Tone Street, Dublin 1 (map here).

With over 5,400 Palestinian political prisoners – more than 200 of them children – behind bars in apartheid Israel’s prison system , 400 prisoners have launched a hunger strike aimed at improving the awful prison conditions they live under.

The issue of Palestinian prisoners and detainees held in Israeli prisons and detention centers transcends one of the individual human rights; it is also one of the collective rights of an entire people – the Palestinian people, who continue to be deprived of the right to self-determination and sovereignty – basic fundamentals of international law. AXA is a multinational company that profits from these violations of rights and international law.

AXA claims commitment to its ethical guidelines, but by maintaining these investments AXA is complicit in the oppression of Palestinians.

AXA provides life insurance worldwide, protecting and supporting people in difficult life situations, while assisting Israeli apartheid. Palestinians deserve the same rights as anyone else. AXA can’t sustain this paradox: insuring while at the same time contributing to oppression of Palestinians.

AXA MUST DIVEST FROM ISRAELI BANKS FINANCING THE ILLEGAL SETTLEMENTS AND FROM ELBIT SYSTEMS.