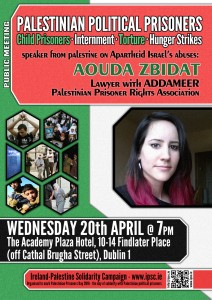 Some of the issues that Ms Zbidat will address in her talk will be:

The Israeli prison system – a central part of the architecture of Apartheid.

Since the beginning of the Israeli occupation of Palestinian territories in 1967, it has maintained a mass detention policy targeting, among others, human rights and political activists, children and elected politicians. Some 800,000 Palestinians have been detained by the Israeli military, approximately 40% of the total male population in the occupied Palestinian territories.  Israel’s torture, ill treatment and other violations of human rights and international law in regards to political prisoners is widespread and systematic. As of February 2016, the number of Palestinian political detainees held in Israeli prisons is 7000, 406 of which are children and 670 are administrative detainees, indefinitely interned without charge or trial.

Through providing legal aid, documentation of the violations and local and international advocacy and lobbying Addameer works to end the policy of mass arbitrary detention and the gross violations of Palestinians’ rights and aspires to build a free and democratic Palestinian society.