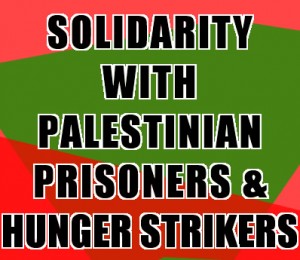 On Tuesday 26th June, from 5-6.30pm at Dublin’s Spire on O’Connell St, the IPSC will hold a solidarity vigil for three Palestinian political prisoners who are now on hunger strike. One of them is in “imminent danger of death” according to human rights organisations in Palestine and Israel. The Irish media has refused to cover this story and the Irish government has refused to act to save the lives of these men.

AKRAM RIKHAWI from Gaza was arrested by Israeli occupation forces in 2004 and sentenced to 9 years’ imprisonment by a military court (these courts convict 99.74% of all accused Palestinians). He has been held in a prison medical centre ever since, as he suffers from various chronic conditions, including diabetes, asthma and osteoporosis. Rikhawi launched his hunger strike on 12 April, demanding that his medical condition be considered during the discussion of his request for an earlier release. Every prisoner is entitled to ask to be considered for early release when at least two thirds of the sentence has been served. He is now on his 76th day of hunger strike.

SAMER AL-BARAQ, from the village of Jayyous, near Qalqilia, has been on hunger strike since May 22. He has been interned by Israel for almost two years without charge or trail under the Administrative Detention regime. Baraq was assured by that he would will be released after the mass hunger strike of over 2,000 prisoners came to a negotiated end, however his administrative detention order was renewed for another three months in violation of the terms of this agreement, thus forcing Mr. al-Baraq to resume his strike. He is now on his 34th day of hunger strike.

According to Palestinian Prisoners’ Rights NGOs, at present over 4,650 Palestinians are now imprisoned by the Israeli state for resisting Israeli Apartheid and occupation. Of those, 218 are children, 7 are women, 27 are elected representatives and more than 300 are ‘Administrative Detainees’ – that is they have been interned without trial not having been charged with any crime or seeing the secret evidence against them.

Those ‘convicted’ prisoners were jailed by non-jury Israeli Military Courts (Palestinians in the Occupied Territories are subject to Israeli military law. Israel’s colonial settlers are ruled by Israeli civil law – another example Israel’s Apartheid system). These military courts, biased from the outset, do not meet international fair trial standards and convict in 99.74% of cases.

Israel’s brutal prison regime is only one aspect of the occupation of Palestine by Israel and its associated Apartheid regime. Indeed, when one considers the ongoing siege of Gaza and fragmentation of the West Bank, Palestine can be viewed as one large open air prison camp. It is vital that people like you take action to support the Palestinians by pressuring Israel and our own elected representatives. Below are two simple actions you can take:

Contact An Tánaiste and Minister for Foreign Affairs and Defence, Mr. Eamon Gilmore TD, and ask him to intervene immediately in this looming tragedy and to speak out in the strongest possible terms.

Israeli fruit, veg, herbs and spices can be found on the shelves of many Irish supermarkets. If you want to show your solidarity with the Palestinian people boycotting these products is a good place to start!

You should also ask your supermarket not to stock them in the first place. Always check the label on fruit (eg peppers, avocados, dates, grapefruit, grapes, figs, passion & sharon fruit), vegetables (eg potatoes, carrots) and herbs and spices (eg basil, dill, tarragon, chives, rosemary, sage, parsley) to see if they orginate from Israel (Barcode starst with 729)- and if they do, then don’t buy them. It’s easy!