[Dublin] Palestinian Culture as a Form of Resistance: Gazelleband in Concert (+Q&A) 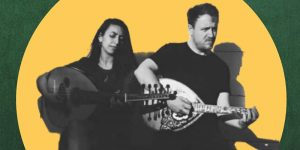 Friday May 13th will see the James Connolly Festival and the Ireland-Palestine Solidarity Campaign host a concert and Q&A with the exciting musical duo Gazelleband, made up of Palestinian oud player Reem Anbar and musician Louis Brehony.

The event will be held to mark the 74th anniversary of Al Nakba, when Palestinians and their supporters commemorate the 1947-49 ethnic cleansing of Palestine.

Raised in Gaza, Reem Anbar rose to prominence as a young musician in the early 2000s, and was quickly heralded as the city’s first female oud player. With an affinity for tarab – the ecstatic traditions of Arab regional music – and the Palestinian heritage of song, Reem absorbed the lessons of older generations of oud players and forged her own path as a self-taught player.

Following journeys through Britain’s alternative, folk and jazz scenes, Dr. Louis Brehony has spent the last decade researching the music of Palestinian displacement, taking up the buzuq along the way. Building a body of written work that crosses continents, Louis draws on compositional training with respect for the soundworld brought by Reem. He is the author of the up-coming book Strings of the Street, based around Palestinian stories of music and resistance.

Nakba Day is marked annually on 15th May to commemorate the violent dispossession by Israeli-Zionist forces of over 750,000 Palestinians and their expulsion from their homeland during the 1947-49 Nakba (Arabic for ‘Catastrophe’). The Apartheid state of Israel was built upon this ethnic cleansing of two thirds of Palestine’s indigenous population.

Forced into exile in refugee camps, to this day these Palestinians and their descendants have never been allowed to return to their homeland by Israel. The process of displacement and occupation of Palestinian land is still ongoing. On Nakba Day we demand that the UN mandated right of return for these refugees is respected, protected and enacted by the international community.

About the James Connolly Festival

The James Connolly Festival is an annual, week-long series of events in radical arts, culture and politics. It is a community-centred celebration of music, film, discussion and debate that brings together the ideas and thoughts of progressive and radical thinkers and organisations from across Ireland and beyond.

For more info and full list of event see: http://jamesconnollyfestival.com/