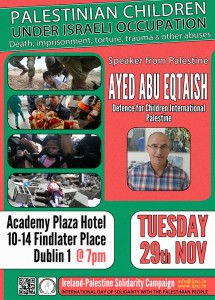 To commemorate the annual International Day of Solidarity With the Palestinian People 2016, the Ireland-Palestine Solidarity Campaign (IPSC) is honoured to host Ayed Abu Eqtaish from Defence For Children International in Palestine.  Mr. Abu Eqtaish will speak on Tuesday 29th November in the Academy Plaza Hotel, 10-14 Findlater Place (off Cathal Brugha Street – map here), Dublin 1 at 7pm.

Hosted by the Dublin branch of the Ireland-Palestine Solidarity Campaign to commemorate the annual International Day of Solidarity With the Palestinian People 2016.