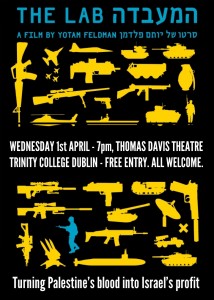 This FREE SCREENING takes place on Wednesday 1st April at 7pm in The Thomas Davis Theatre, Arts Block, Trinity College Dublin. The screening will be followed by a discussion with the film’s director, Yotam Feldman who is on a tour of Ireland.