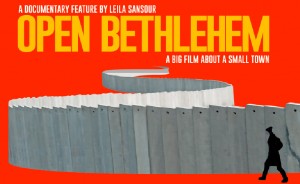 Armed with her camera and a dilapidated family car that keeps breaking down, Filmmaker Leila Sansour plans to make an epic film about a legendary town in crisis but just few months into filming her life and the film take an unexpected turn when cousin Carol, Leila’s last relative in town, persuades her to stay in Bethlehem, her hometown she had left years before, to start a campaign to save the city.

As the pair launch OPEN BETHLEHEM, Leila finds herself trapped behind a wall in the very place she so much wanted to leave. The face of Bethlehem is changing rapidly with potentially detrimental con sequences. Reports predict that if trends continue the Christian community of Bethlehem, a city that provides a model for a multi faith Middle East, may be unsustainable within one generation. Leila’s plan to stay a year stretches to seven, and is only resolved when she realizes that, sometimes, the biggest dreams take flight from the smallest places.

OPEN BETHLEHEM is a story of a homecoming to the world’s most famous little town. The film spans seven momentous years in the life of Bethlehem, revealing a city of astonishing beauty and political strife under occupation. The film draws from 700 hours of original footage and some rare archive material. In fact the making of this film has led to the creation of the largest visual archive of Bethlehem in the world and plans are currently being discussed with University College London (UCL) to turn the collection into a museum.