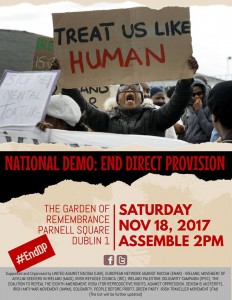 Direct Provision was introduced as a so-called ‘temporary measure’ in 2000. 17 years later it is still in place, having devastated the lives of many thousands of people fleeing oppression and persecution.

Direct Provision means that asylum seekers are forced to live in centres that are very close to being prisons for years on end while waiting for their claims to be processed. They are made to ‘live’ on €21.60 a week, denied the right to work and denied even the right to cook food in the centres.

The children of asylum seekers grow up in these inhumane conditions which separate and segregate them from other children. And then, when they reach 18, they are denied access to Third Level education.

The politicians keep saying they will do something but keep failing to do anything.