[Dublin] Nakba Day Vigil – In Solidarity with the #GreatReturnMarch (IPSC) 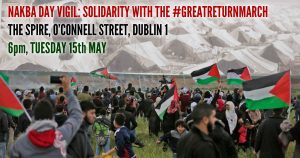 To commemorate the 70th anniversary of the Palestinain Nakba, and in solidarity with Palestinians on the #GreatReturnMarch, please join on Tuesday 15th May between 6pm and 7pm at The Spire on O’Connell Street in Dublin.

May 15th marks the 70th Anniversary of Nakba Day – the Day of the Catastrophe – the day on which Palestinians everywhere commemorate the ethnically cleansing of over 750,000 indigenous Palestinians from their homes, two thirds of the Arab population of the time, forcing them into exile so that the state of Israel could come into existence.

Of course, it didn’t all happen on one day – it was a continual process between 1947 and 1949. Unfortunately, as recent events make clear, the Palestinian catastrophe it is a process ongoing to this day, seventy years later.  Just in recent weeks, Israeli occupation forces have shot dead almost 50 unarmed Palestinian protesters, and wounded thousands, in Gaza. These protesters were demanding the implementation of the Right of Return for Palestinian refugees, who make up 70% of Gaza’s illegally besieged population. The Irish government has condemned these shootings – but has done nothing to sanction the Israel state for these crimes.

Join us to stand in solidarity with the Palestinian people on Nakba Day.

Organised by the Ireland-Palestine Solidarity Campaign.
Supporting organisations: Trade Union Friends of Palestine, Gaza Action Ireland, Student’s For Justice in Palestine, Palestinian Community in All Ireland, and Academics for Palestine.