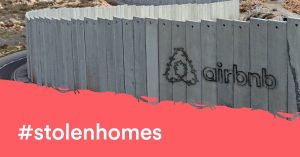 To mark Nakba Day 2019, the Dublin branch of the IPSC will be holding a lunchtime protest outside AirBnb’s European headquarters in 8 Hanover Quay, Grand Canal Dock, Dublin 2. Join us from 1pm to 2pm as part of a global day action protesting AirBnb’s continued profiteering from rentals from illegal Israeli settlements in Palestine.

After announcing they’d ban vacation rentals in illegal Israeli settlements from their platform, Airbnb did a complete reversal and will continue to allow rental suites on the ruins of Palestinian lives and land.

This is Palestinian land that Palestinians are not allowed to enter, but Airbnb has decided they’re ok helping everyone else going to this stolen land for their vacations.

The reneging on a commitment to delist from the settlements is a betrayal of all the human rights organizations and activists who cheered Airbnb’s earlier decision. And it’s a slap in the face of Palestinians, international law, and even Airbnb’s own vision to create a world where anyone can belong anywhere.

There’s no neutrality in situations of injustice.

If Airbnb wants to continue to allow rentals on the ruins of Palestinian lives and land then they will continue to get pressured to do the right thing – and we’re going to continue putting the pressure on them.

So please join our protest this Nakba Day, which is marked annually by Palestinians and their supporters around the world on 15th May to commemorate the violent dispossession by Israeli-Zionist forces of over 750,000 Palestinians and their expulsion from their homeland during the 1947-49 Nakba (Arabic for ‘Catastrophe’). The state of Israel – declared on 14th May 1948 – was built upon this ethnic cleansing of two thirds of Palestine’s indigenous population. Forced into exile in refugee camps in neighbouring these Palestinians have never been allowed to return to their homeland by Israel. On Nakba Day we demand that the UN mandated right of return for these refugees is respected, protected and enacted by the international community.