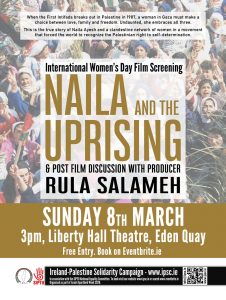 Naila and the Uprising:  A special International Women’s Day screening

Followed by a discussion with the film’s producer Rula Salameh

On Sunday 8th March the Ireland-Palestine Solidarity Campaign and the SIPTU National Equality Committee invite you to a special International Women’s Day free screening of the highly acclaimed Palestinian documentary film ‘Naila and the Uprising’ in Liberty Hall Theatre at 3pm. The film will be followed by a discussion and Q&A with the film’s producer Rula Salameh, moderated by Betty Purcell.

The screening is FREE – but you are advised to book tickets in advance on Eventbrite – CLICK HERE TO BOOK.

When a nationwide uprising breaks out in Palestine, a young woman in Gaza must make a choice between love, family, and freedom. Undaunted, she embraces all three, joining a clandestine network of women in a movement that forces the world to recognize the Palestinian right to self-determination for the first time.