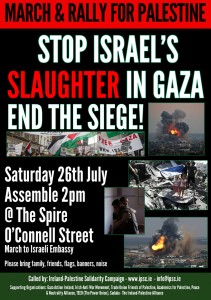 THEY KEEP KILLING, WE KEEP MARCHING!

This Saturday 26th July in Dublin there will be another march in solidarity with the people of Palestine, especially those trapped in Gaza who are being killed in their hundreds, maimed in their thousands and terrorised in their entirety by the Israeli war machine.

Please bring friends, flags, banners, noise. We would ask that you do not bring party-political flags (Irish, Palestinian or others).

The Israeli state has launched a fresh assault on the Palestinian people, a collective punishment of a captive population. Israeli officials are now talking about “expanding and intensifying” the assault on Gaza which has already killed some 660 people, the vast majority of them civilians including 161 children and 91 women. Over 3,500 people, mostly civilians, have been wounded, including almost 1,000 children and 700 women. 500 houses have been targeted and destroyed and 100s of others extensively damaged, while thousands of civilians have been forcibly displaced. Attacks have also been taking place in the West Bank for the past month, where at least 10 people were killed.

We must call for an international arms embargo on Israel, and for Israel to be suspended from the Euro-Med Agreement whihc grants its trading privileges with the EU. Israeli impunity must end.