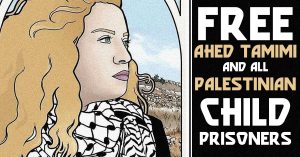 Please join the Dublin branch of the Ireland-Palestine Solidarity Campaign outside the gates of the Dail (Irish Parliament) for a lunchtime protest between 1pm and 2pm on Thursday 25th January 2018.

Ahed Tamimi is a 16-year-old Palestinian girl who has been detained and is awaiting trial for slapping an Israeli occupation soldier who invaded her village of Nabi Saleh. Ahed is just one of roughly 350 Palestinian children held in Israel’s apartheid prison system where torture and ill treatment during arrest and detention are routine, including horrendous abuses against children.

We are holding a symbolic protest outside the Irish parliament to highlight the issue of child prisoners and to appeal to the Irish government to take concrete action to end Israel’s brutal treatment of Palestinian children like Ahed Tamimi and Fawzi al-Junaidi.

Organised by the Ireland-Palestine Solidarity Campaign – supported by United Against Racism and Students for Justice in Palestine.