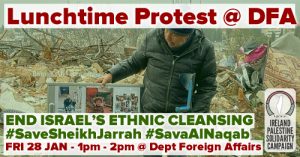 We ask you to please join us for an hour this Friday 28th January at 1pm at the Department of Foreign Affairs (Iveagh House, 80 St. Stephen’s Green, Dublin 2) to show your opposition to Israel’s actions, and to tell our government that words are not enough, we demand action now!

Hosted by the Dublin IPSC