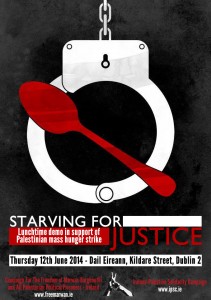 There will be a protest in support of the Palestinian detainees on hunger strike in Israeli prisons on Thursday 12th June 2014 from 1pm-2pm outside Dail Eireann (the Irish Parliament), Kildare Street, Dublin 2.

Thursday 12th June will mark the 50th day of the mass hunger strike of Palestinian administrative detainees in Israeli jails, protesting against their ill treatment and their internment without trial or charge. Their conditions are deteriorating daily and around 80 hunger strikers have been hospitalised and are in great danger. The Israeli state is now trying to pass legislation that will allow force-feeding of the strikers, which prisoners have labelled a form of torture.

This is the longest mass hunger strike among prisoners in Palestinian history and the hunger strikers remain steadfast in their demand to end the policy of administrative detention.

It is very important to show your solidarity with the Palestinian hunger strikers, please come and join us this Thursday between 1pm – 2pm at the Dail.